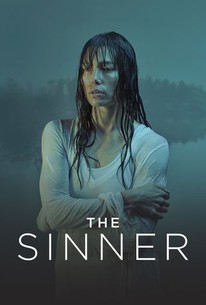 "Smartly unpredictable and led by powerful performances from a talented cast, the darkly compelling The Sinner sinks its hooks in fast and doesn't let go."

Season 1 of the drama series opens with Cora Tannetti (Jessica Biel), a young mother, stabbing a man to death with no apparent motive and without later being able to remember committing the crime. Detectives Harry Ambrose (Bill Pullman) and Dan Leroy (Dohn Norwood) are assigned to the case, but while Dan considers it open-and-shut due to several people witnessing the murder, Harry is convinced there must be something more going on and decides to continue the investigation on his own.

"This delightful, hilarious, clever mystery-comedy is total entertainment, with expert, precision work at every level -- but also with an irresistible, gleeful sense of fun bursting from the screen."

The circumstances surrounding the death of crime novelist Harlan Thrombey are mysterious, but there's one thing that renowned Detective Benoit Blanc knows for sure -- everyone in the wildly dysfunctional Thrombey family is a suspect. Now, Blanc must sift through a web of lies and red herrings to uncover the truth.

Inspired, says creator Charlie Brooker, by the classic horror film `Dawn of the Dead,' this five-episode series chronicles a nightmare scenario in which Britain is taken over by zombies. No one is spared the wrath of the undead ... except the contestants and production staff filming a season of `Big Brother.' As they're unaware of what's happening outside, the house becomes a safe haven. Then the doors open on eviction night and all hell breaks loose. Among the stars is `Big Brother' presenter Davina McCall, who plays herself (and her dead self).